The search for Avery ramps up in these GENERAL HOSPITAL spoilers, and they may be running out of time to bring the little girl home safely! Meanwhile, Franco and Liz continue to deal with the fallout of the truth of his past, Kim and Julian get closer, and Griffin has some news for Carly.

At the hospital, Drew runs into Liz and asks for an update. “How’s Franco doing?” he inquires. How much will she tell him? Meanwhile, Franco informs someone: “Every word out of your mouth is a lie.” Is he paying Betsy another visit? Does he blame her for what Jim Harvey did to him all those years ago?

At Charllie’s Pub, Julian worries that he and Kim aren’t ready for this, but she assures him she’s very happy. “I’m right where I wanna be,” she declares with a warm smile. They’ve agreed to keep things casual, but could this relationship be more serious than either of them are willing to admit? 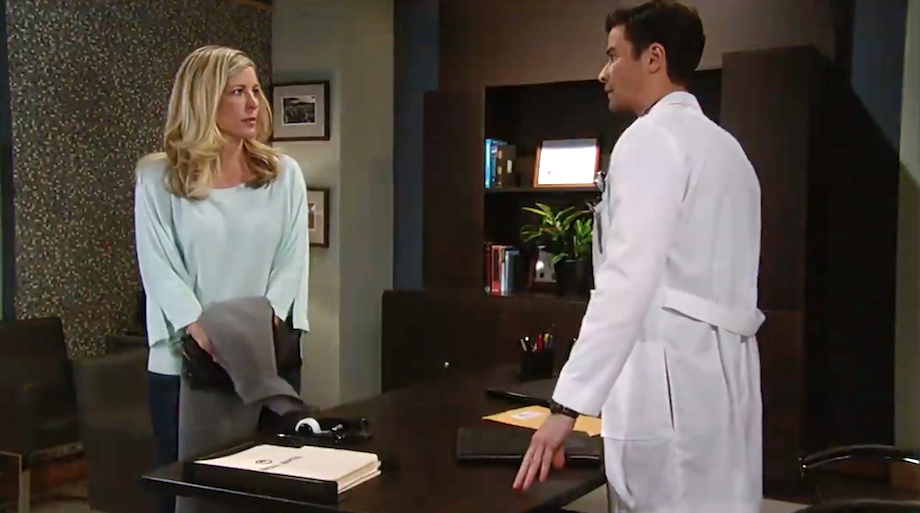 What news does Griffin have for Carly? (Photo Credit: ABC)

At the hospital, Carly has another appointment with Griffin, and the expression on her face has her nervous. “What’s going on?” she asks with a frown. After all the tests, did Griffin actually find something wrong with Carly? Or does he still think she’s imagining everything she’s seen regarding Morgan?

With Mike and Avery missing, Sonny is at the end of his rope with worry about his father and his daughter. And it appears that Detective Chase doesn’t have particularly good news. “What the hell are you talking about?” Sonny barks. Meanwhile, Ava has taken it upon herself to make a televised plea for any information regarding her daughter’s whereabouts. “Please,” she cries on camera, holding up a photo of the little girl. “Please help us find her!”

Maurice Benard Mourns the Passing of His Beautiful Pet

Everything You Need to Know About This Year’s Daytime Emmys

Kirsten Storms was “an Emotional Wreck” Sending Harper to Preschool