The pieces of the puzzle are starting to come together in these spoilers from GENERAL HOSPITAL. But as everyone tries to figure out which of the two men is the real Jason Morgan, the truth could tear Port Charles apart!

Even amid all the drama in town, Ava and Griffin’s relationship continues to blossom. “I will not take no for an answer,” the handsome doc informs her in the hospital hallway. And from the smile on Ava’s face, it doesn’t look like “no” is what she’s thinking!

Liz is still reeling from seeing the man with Jason’s original face, and has realized that this has to do with the secret that Franco has been keeping. “Jason had a twin,” Franco confirms to her, “and I know what happened to him.” And in Sam’s hospital room, Alexis is visiting her daughter and getting an update on everything that’s going on with Jason and the mysterious Patient Six. “What if this man’s story is true,” Alexis suggests, “and he is Jason?” Sam looks as though she doesn’t even know where to start with that one! 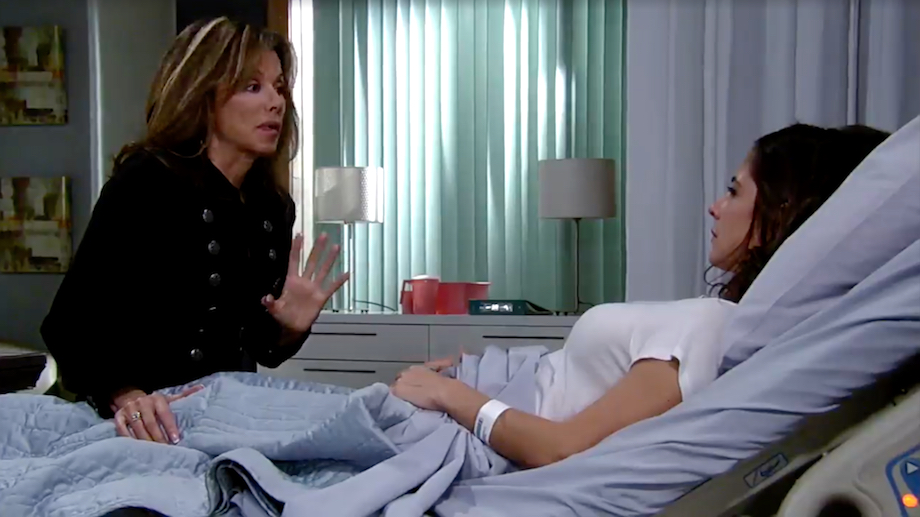 While many people have immediately accepted that Patient Six is the real Jason Morgan back from the dead, the man who has been living as Jason for years now is finding that he still has some support himself. “I want you to know,” Curtis assures Jason, “I got your back.” And at the Metro Court, Sonny has a meeting with Diane to fill her in on Jason’s shocking return. But she’s still wary about the whole thing. “You might be being played,” the attorney warns. Is Patient Six the real Jason, or is there something else going on?

Six was arrested for assaulting Franco, and as soon as Dr. Klein was brought into the police station, he immediately recognized him from the clinic in St. Petersburg where he had been held captive for years. And when the two men are placed in adjoining cells, Klein is going to be very grateful to have those bars between them! “We finally have a chance to talk,” Six declares ominously. Can he get Klein to reveal exactly what’s going on?