Obrecht wanted revenge on Peter but in these GENERAL HOSPITAL spoilers will she enact her vengeance by murdering the man? Or will Nina be able to stop her before she does something she’ll never be able to take back?

Blaming Peter for bringing Cesar Faison back to Port Charles and causing the death of her son, Nathan West, Obrecht has been determined to take her own special kind of revenge on him. When she had him tied up in the cabin, he begged for his life. “Is treating me this way gonna bring Nathan back?” he argued. And although Nina originally went along with Obrecht’s scheme, as Peter’s condition worsened and Obrecht’s behavior became more and more extreme, she began to have second thoughts, so he began working on her. “It’s only a matter of time before someone finds me,” he suggested. 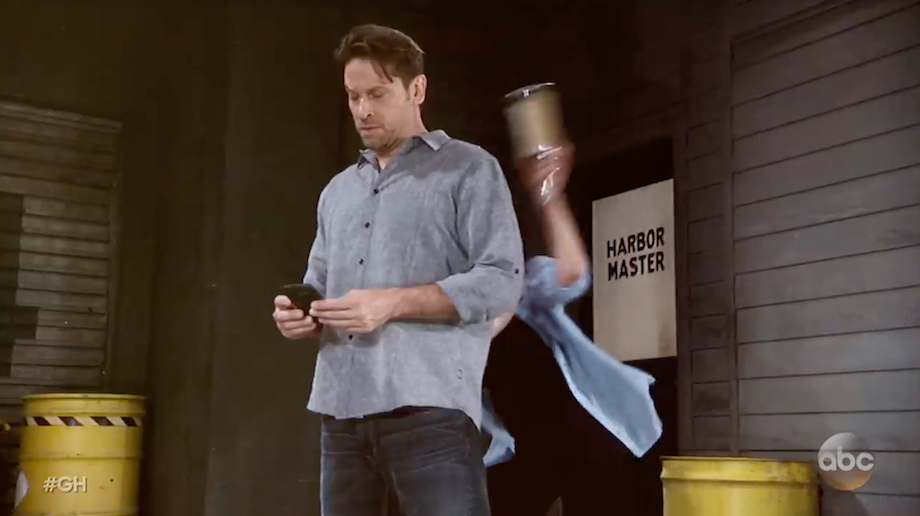 Franco gets too close to the truth for his own safety! (Photo Credit: ABC)

But now Obrecht may have gone too far to be stopped! Outside the Harbor Master’s Office at the docks, Franco is busy looking at his phone so he doesn’t see Obrecht behind him as she smashes him in the back of the head with a bottle, knocking him out to keep him from discovering her secret! Then, it’s another bottle that could spell Peter’s death as she stands menacingly before him holding a molotov cocktail! “You have come to the end of the road,” Obrecht coldly declares.

As the doc lights the cloth, Nina attempts to grab her, but it’s too late and Obrecht tosses the bottle, causing the entire room to go up in flames! From the doorway, Nina screams “Nooo!” as she’s helpless to do anything. Will Obrecht get her revenge by killing Peter?

Check out this tease for the thrilling week to come and for more GH previews, keep reading the ABC edition of Soaps In Depth magazine!

With an Inspirational Message to Her Female Fans, Laura Wright Proves Age is Nothing But a Number