After Michael put a ring on it, he and Nelle announced their engagement and she visited Carly to taunt her with the news. Thankfully Sonny arrived before Carly (who was secretly communicating with her mysterious Ferncliff neighbor) lost it on Nelle. Though Sonny quelled his wife’s fears, he and Jason were concerned. Michael, however, was determined to save his mother and his baby from Nelle. So when Chase and Jordan asked him to help them bring down Nelle, he was game — even if it meant pretending to get himself killed! Nelle, meanwhile, was on edge after Ava taunted her with the baby blanket again, but Michael soothed her nerves by suggesting they get married immediately. She was at first suspicious, but ultimately agreed they should wed the very next day.

When Nelle rubbed her ring in Chase’s face, the detective expounded on how miserable she’d be with Michael and suggested he’d kick her out once she had the baby. Michael again calmed her with wedding talk… and then asked her to sign a prenup! Michael got her to sign by insisting it was a standard Quartermaine document, but Ned let slip that Olivia had never signed one. Before Nelle could freak out, Chase asked her to meet him. When the shirtless hunk confessed that he’d been ready to profess his love when she’d ruined everything by reporting their affair to the police, Nelle was tempted! Meanwhile, Finn reached out to his brother, but Chase gave him the cold shoulder. When Finn learned that Chase’s parents couldn’t make it to Port Charles for his birthday, he called in a mysterious favor.

Having been tapped as Nelle’s maid of honor, Josslyn apologized to Oscar and embraced the possibility that something good was actually happening for her family. Then he asked about the shirt she’d had with the tag still on… but before Josslyn had to answer, Cameron arrived. Back to work at Lila’s Kids for the summer, he teased Joss about breaking his heart when they were kids. She later was interrupted before being able to confess to Oscar that she’d stolen the cologne he loved. 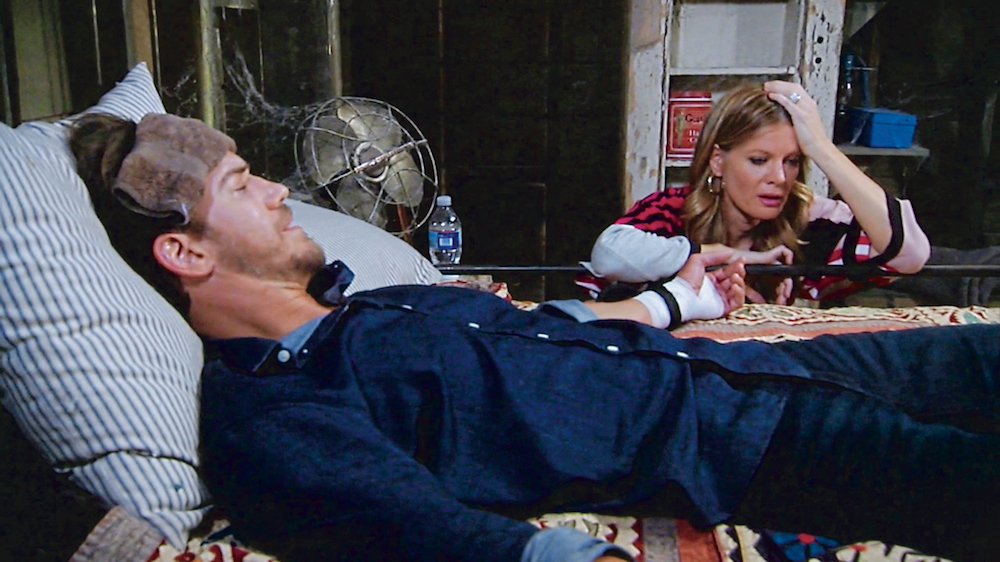 ”I miss the days when I was the craziest one in my family,” sighed Nina. (Photo Credit: ABC)

Will Peter Be Rescued?

Peter’s cry for help was heard by a young PC Pioneer bugle boy named Wyatt. Although the scared boy ran off, he later returned. Unfortunately, as he tried to untie Peter, Obrecht returned! Wyatt hid and then ran again, leaving behind his bugle. When Obrecht found it, Nina claimed it was hers! When Obrecht left to get more meds for Peter’s infection, Nina revealed that she’d covered for him because Maxie wouldn’t want him dead. As Peter told her about Wyatt, the kid was checking in for art therapy with Franco! It turned out that Wyatt had a penchant for telling tall tales, so Franco doubted his story about a man being held captive in a cabin. But when they ran into Finn sparring with Obrecht, Wyatt recognized the kidnapper’s shoes! After she made a quick exit, Wyatt remembered the notebook he’d taken from the cabin and Finn instantly recognized characters from The Severed Branch. Curtis and Sam, meanwhile, found evidence indicating a woman in sensible shoes had taken Peter.

Finn Gets Closer to the Truth!

Obrecht was surprised when Finn and Franco showed up at the cabin — and even more surprised that when they all went inside, no one was there! She quickly explained the mess away. Finn left Anna a message saying he had news about her son. He also showed Wyatt a photo of Peter, but the kid didn’t recognize him because of the beard he’d grown in captivity. Obrecht, meanwhile, found Peter and Nina hiding and was ready to kill. Instead, Nina convinced her to move Peter to the Wyndemere stables. Of course, that meant Nina had to find a way to keep Valentin away! Obrecht became so distracted by her efforts to “help” Peter write his novel that she missed Nina’s warning that Valentin was coming.

Maxie was thrilled to finally bring the baby home, but with Peter missing and possibly dead, she realized she still cared for him. She also continued to throw shade at her former BFF and, when Lulu finally called her out, things got physical! After they battled with harmless photo shoot props, the gals collapsed in laughter. Maxie admitted her friend’s happiness was hard to be around, so Lulu agreed to give her space. Maxie, in turn, threw her arms around Lulu. 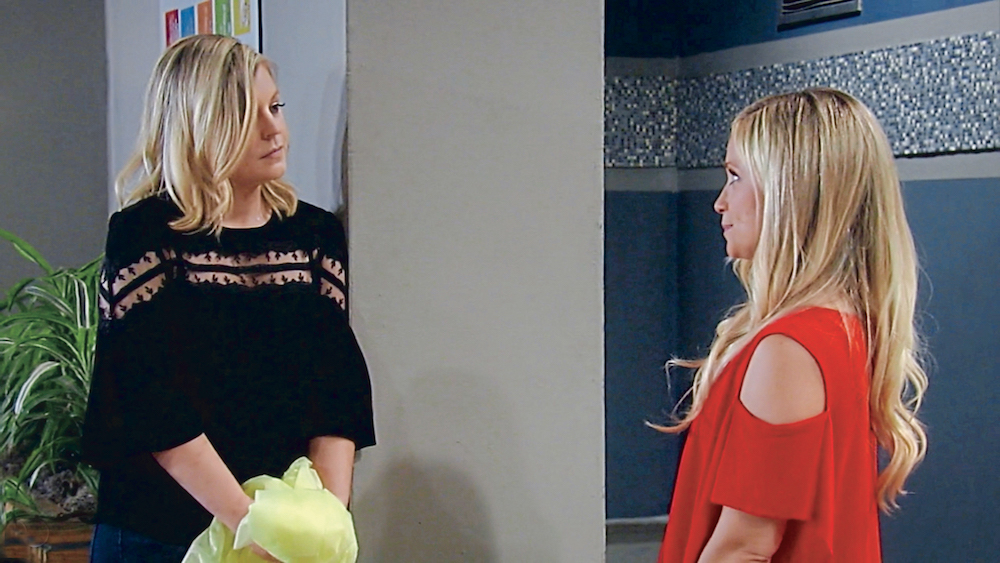 Apparently, these two should have just duked it out ages ago! (Photo Credit: ABC)

Scott made sure Franco let Alexis know about the suggestive photo Bensch had of Griffin and Kiki, knowing it would be used in court to make her look bad. Kiki insisted the photo meant nothing, but Griffin disagreed — and Scott overheard them arguing over whether to tell Alexis about having slept together! Scott tried to tell Ava what he’d heard, but having seen the photo, she (wrongly) assumed she knew all. She also assumed that the legal system would protect Kiki. Over at the hospital, Kiki learned that the doctor she was supposed to shadow next had backed out, because he didn’t want to work with her. With no doctors available, Kiki’s participation in the program was put on indefinite hold. A smug Bensch told Kiki it must be frustrating to know that she’d thrown away such a great opportunity.

Believing Mike had moved the body from Croton to the site of Charlie’s Pub, Sonny went to sniff around the property… only to have Julian reveal his plans for a massive renovation and expansion. Concerned, Sonny offered to buy Charlie’s. Julian wasn’t interested… and his curiosity was piqued after he found a 1979 photo of Mike and Charlie Delaney. With her chemistry with Jason at a high, Sam received news her divorce from Drew was final. She also agreed to be godmother to the baby Lucas and Brad planned to adopt. Liz introduced Franco to her first boyfriend and current houseguest, Terry — who was now a woman. With the doctor in town for a few weeks, they invited her to their upcoming wedding.