Mike started talking to Sonny about what had happened in Croton… only to have Dante interrupt. After explicitly warning Sonny not to interfere in Carly’s incarceration, Dante left, but by then Mike’s moment of clarity was lost. With his father responding relatively well to new meds, Sonny took him to celebrate at Charlie’s Pub — where Mike recognized the photo of the bar’s original owner. He claimed to have last seen Charlie Delaney around the time of the Croton incident. When the guys began arguing over when Mike actually came to Port Charles, Margaux arrived and intervened. As soon as Mike explained they were family, Sonny got in the DA’s face for using Carly to get at him. She simply warned him to keep his nose clean. After she had left, Sonny told Max to look into Charlie.

At Ferncliff, newly-hired janitor Jason insisted Carly play it cool so Mary Pat didn’t realize they knew each other. Kevin recognized Jason and suggested he should quit before things went too far, but he did later cover for Carly and her pal. Mary Pat later fired Jason when he asked too many questions, and Carly became curious about the screaming patient in the room next to hers. After warning Carly her neighbor was dangerous, Mary Pat drugged him for being a bad boy! In a bright moment, Sonny got to surprise his wife with a visit, and Carly realized he finally believed her to be innocent. Later, using a phone Jason had slipped her, Carly figured out her neighbor was sending an SOS through the wall. 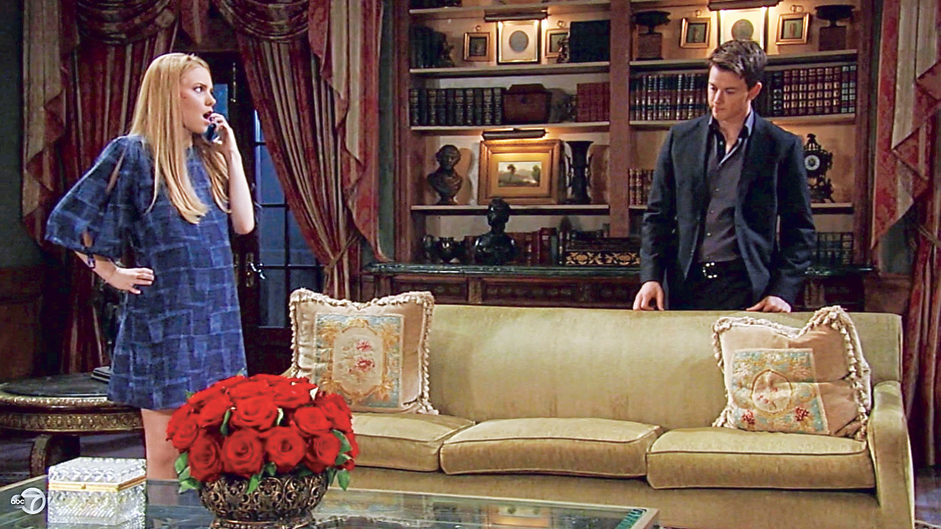 As Chase reviewed his Janelle Benson case file, he recalled how the schemer had lured him into her bed in order to spike both his career and the investigation of her fiancé Zach’s death. Of course in her version of events, Chase had believed her innocent, become obsessed and followed her to Florida. Once Dante and Jordan were filled in on the case, the commissioner suggested Chase try to get close to Nelle again. Nelle, meanwhile, sent herself flowers. Although Michael caught her in the lie, he played along. Though clueless to his machinations, she panicked when the bottle of Morgan’s cologne she’d used to gaslight Carly disappeared. Josslyn eventually confessed to having taken it, but claimed to have thrown it away. when in reality, she’d given it to Oscar as a gift. Needless to say, Nelle was worried when she smelled the scent on Oscar! Then Chase sidled up to her and revealed that while he still believed her to be guilty, he also still had feelings for her. Michael naturally came to his babymama’s defense… and then totally made her day by saying just what she wanted to hear!

When Julian and Kim ran into Obrecht in the woods and then heard Peter scream, the mourning mother quickly explained it away by claiming she was on a primal scream therapy retreat. She then rushed back to her hostage and rescued him from a snake. She also gave Peter antibiotics for his hand… before presenting him with a cupcake and wishing him a happy birthday… and saying it would be his final one! Running into Anna, Liesl was furious to find her nemesis happy with Finn and vowed that once Peter was dealt with, his mother would be next. After reading The Severed Branch, however, Obrecht told Peter she might just let him live… if his sequel was a full confession. Peter’s book also gave Maxie pause, leaving her straddling the line between hate and empathy when it came to her missing brother-in-law.

Nina started searching for Peter’s missing flash drive — which no one realized was in the Metro Court’s lost and found! With no leads, she returned to work and found Valentin had decorated her office to look like their Moroccan bungalow. Instead of being moved by the memory, she was annoyed she’d ever been fooled into taking him back, so Val reminded his wife that he’d covered for her with Cassandra — which she took for blackmail! Even worse, he revealed that Anna knew she was the one who’d taken Cassandra down. 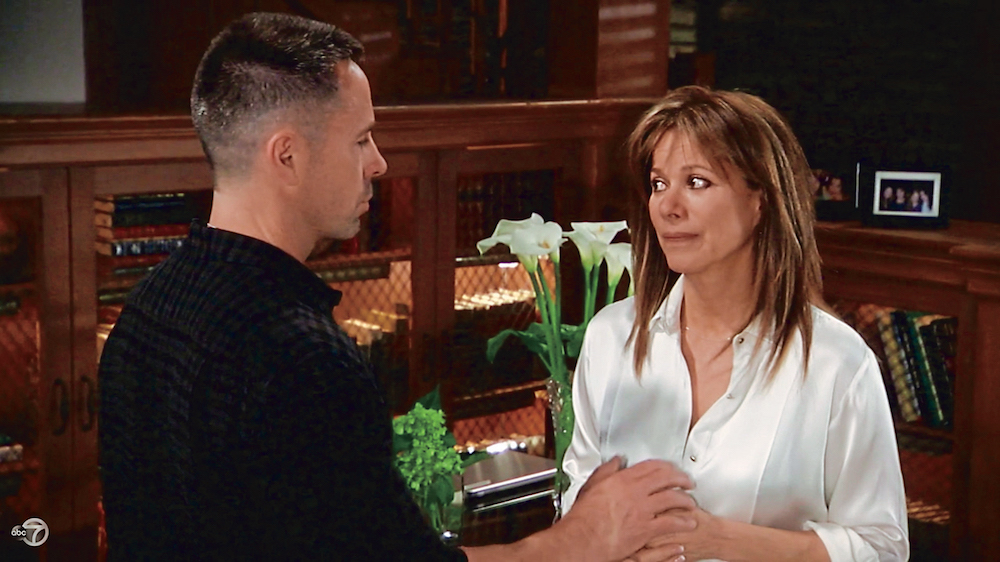 Julian sweetly let Alexis keep the house he bought her to replace the one he got blown up. (Photo Credit: ABC)

Stella Made a Move

While Peter tried to convince weak-link Nina to release him, Sam and Curtis were searching for him and even broke into his former hotel room — which was now Margaux’s! The DA was not pleased to catch them and, after learning they worked for the PCPD, questioned Jordan about her investigators. The commish insisted she trusted them. Unfortunately, Jordan also trusted Stella, who claimed to be supporting her upcoming nuptials… even as she reached out to Curtis’ ex, Chandra!

As his romance with Kim heated up, Julian intended to deny Alexis’ request he join her in therapy… until he realized she could identify the birth mother of the baby Lucas was adopting. Alexis felt empowered by the watch her father had gifted her mother — the one with the hands frozen at the time of Helena’s death. Not only did she blow off Anna’s apology over the Finn triangle, but she bashed her ex when he came to therapy with her. After Julian revealed he’d been attracted to her because she’d offered him redemption, however, she thanked him for coming. She later tried to return the deed to the house, but Julian convinced her to keep the gift, which had been given in love. When she thanked him, he countered she might get the chance to return the favor.

While Amy confirmed for Lulu that men had received better treatment at the hospital than had women, no one actually corroborated Kiki’s claims against Bensch… until Francesca came forward. In spite of Alexis warning that it could get ugly, Kiki and Francesca were ready to testify against their harasser. Ava and Franco, however, doubted the system and hatched a back-up plan.