There’s conflict everywhere in these GENERAL HOSPITAL spoilers, so buckle in for a bumpy ride! Julian gets frustrated with Alexis, Lucas worries his adoption will fall apart, Nina refuses to forgive Valentin, and Mike lashes out at Sonny. Will anyone come through it okay?

Julian may have agreed to accompany Alexis to therapy to help her work through her issues, but it doesn’t appear to be going very well. “Let’s just call the whole thing off!” he hollers as Alexis sighs and looks disappointed.

Elsewhere in the hospital, Lucas and Brad are worried about their adoption encountering a complication that could destroy the future they have planned together. “I don’t know how we could get through something like that,” Lucas sighs as Brad frowns. Could it really be that bad? 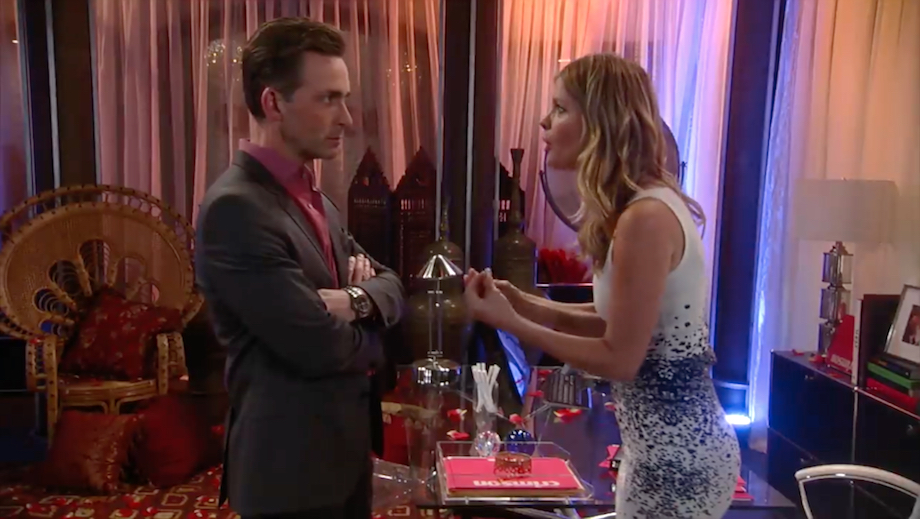 Curtis and Sam haven’t had a lot of luck locating Peter, but they are not giving up their investigation. “Valentin knows more,” Sam insists. “That, I’m sure of.” The question is, can they get the information out of him? Because Valentin has his own problems right now, since his attempt to woo Nina back by decorating her office like their tent in Morocco didn’t have any effect at all. “Because of you,” Nina yells, “I’ve had to take justice into my own hands!”

At Charlie’s Pub, Sonny continues trying to press his father to remember more about their past in Brooklyn, but things take a turn and when he tries to offer comfort, he’s rebuffed angrily. “I am not an invalid!” Mike shouts, pulling away. Also, D.A. Margaux Dawson enters Charlie’s Pub and encounters a familiar face. “We meet again,” she remarks.

At Ferncliff, Carly worries that she’s not going to be able to get through this, especially not if she loses her support. “I’m not gonna make it in here without you,” she whispers to Jason. But can he manage to keep his job and keep an eye on Carly at the same time?

"Because of you, I've had to take justice into my own hands!" #GH55 pic.twitter.com/T8k4UGf31E

Who Is Nurse Francesca on GH?