The holiday hits just keep coming in these spoilers from GENERAL HOSPITAL! Carly and Michael react to Nelle’s pregnancy bombshell, Drew learns that he’s Oscar’s father, Finn and Anna get closer, and Jason begs Sam not to leave him! You will not want to miss a minute of the drama!

Carly was absolutely flabbergasted when Michael informed her that they were at the hospital because they were confirming that Nelle is pregnant. And then the young woman rubbed it in Carly’s face by sneering: “Congratulations, Grandma!” But even though Kim confirmed the pregnancy, could the new OBGYN not be entirely on the up-and-up and in fact agreeing to help Nelle maintain her charade? Or, even worse, could Nelle actually be pregnant with Michael’s baby?!

Drew has had a lot to deal with in recent weeks, mostly learning that he’s not Jason Morgan as his implanted memories had led him to believe. So he’s really not prepared when Kim pays a visit to his home to inform him: “Oscar’s your son.” Did Josslyn and Oscar’s DNA test lead them to the same conclusion? Is Drew ready to be a dad — and to a teenager, no less? 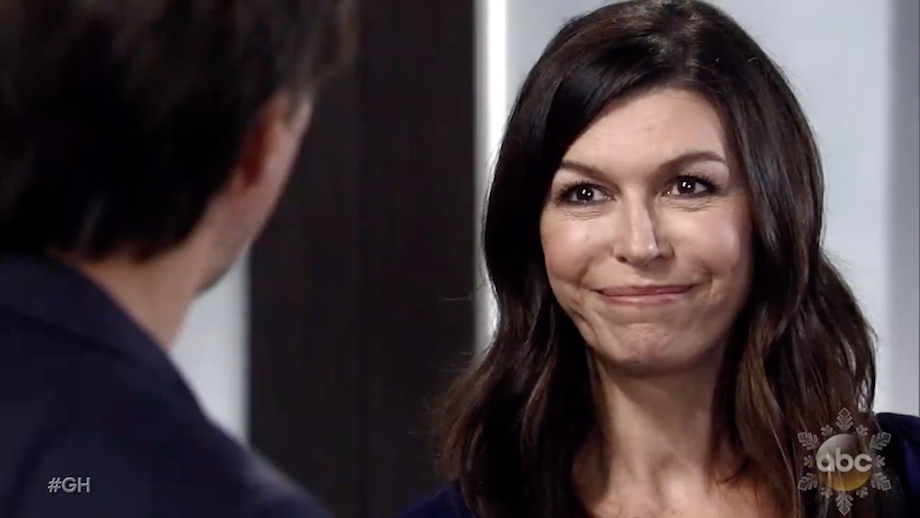 Is Anna giving Finn the key to her heart? (Photo Credit: ABC)

Finn and Anna have been keeping up their sham relationship in order to help bring down Cassandra and the drug runners in Port Charles, but now things may be going a bit too far! Finn looks startled when Anna presents him with a key teasing: “I’ll see you at home… honey.” Could this fake romance be on the road to becoming very real?

Sam made her decision to stand by her husband, even after it was revealed he’s actually Andrew Cain, but Jason’s return has turned her entire life upside down and left her heart torn between the man she loves now and the man she once loved… and maybe still does! When Sam tries to avoid Jason on the docks, he steps in front of her. “Sam, wait,” he begs. “Don’t walk away.” Can she resist the pull she still feels towards Jason?

Everything You Need to Know About Britt Westbourne!

Laura Wright Reveals How She Fell in Love With Wes Ramsey!