Things are not looking good for Carly in these GENERAL HOSPITAL spoilers, but she’s still got Jason in her corner and he’s not going to give up on her without a fight. Still, is there anything he can do that won’t make the situation worse?

Sonny is seething with anger that his wife has been locked up in Ferncliff, and when he encounters D.A. Margaux Dawson sitting at a table in Charlie’s Pub, he confronts her. “You had her sent to that hellhole in Ferncliff,” he hisses through gritted teeth. Of course, Margaux isn’t bothered because she was just doing her job… and if it hurts Sonny in the process, all the better. 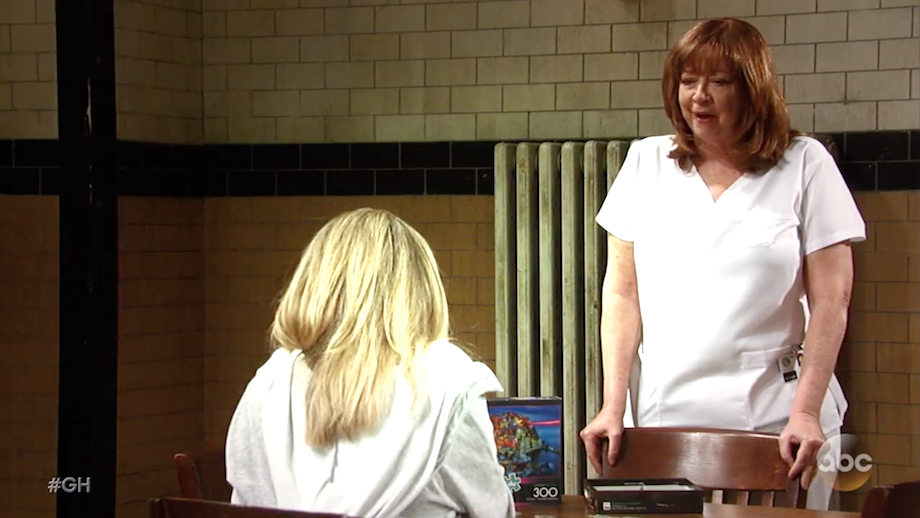 Trapped in Ferncliff, Carly struggles to fight back against the drugs that they’re giving her, and as she sits at a table doing a jigsaw puzzle, nurse Mary Pat approaches and tries to make out like things aren’t a complete nightmare. “It isn’t so bad here, is it?” she smiles. Carly would beg to disagree… if speaking up wouldn’t make things ten times worse for her!

Thankfully, Jason has gotten himself a job at Ferncliff, working on the sanitation staff. But as he mops floors and keeps things clean, he’s also keeping a close eye on his best friend. But can he keep Mary Pat and the other orderlies from noticing their connection? And while Jason’s first instinct is to rescue Carly, can he resist breaking her out of Ferncliff and making even more trouble for her?

Don’t miss this tease for the exciting week to come and for more GH previews, keep reading the ABC edition of Soaps In Depth magazine!

Maxie and Chase a Couple on GH? — Vote Now!