There are questions that need answers in these GENERAL HOSPITAL spoilers, but some may not like the answers they get! Alexis runs into another roadblock in her mayoral campaign, Julian is still under fire, Sonny wants to get to the bottom of what’s going on with his father, and Lulu is curious about who Peter August really is!

After the political ad trashing her by exposing her relationship with Julian, Alexis is looking to do some damage control. But when she pays a visit to Sam at the office looking for an endorsement, Drew isn’t sure that’s the best idea. “If Aurora Media were to endorse you,” he cautions, “it would tank your entire campaign.” Meanwhile, Julian continues to run Charlie’s Pub with no intention to sell his new business to anyone, especially Jim Harvey! “My offer’s still on the table,” the developer insists, but Julian just stares back at him. 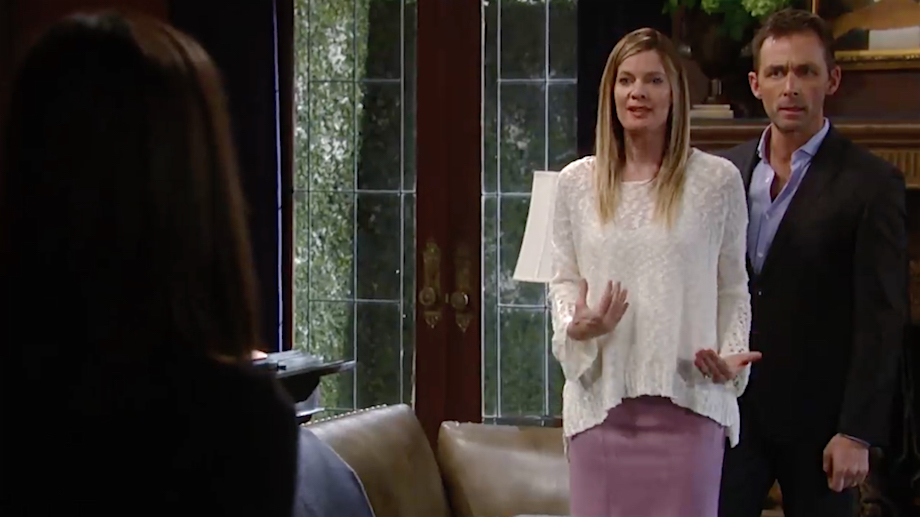 Nina wants Anna to back off! (Photo Credit: ABC)

Anna wants to talk to Valentin, but Nina needs him more right now as she’s still raw from losing Nathan and planning his funeral. “If you have any business with my husband,” Nina cries, “do it later!” But Anna looks pretty determined, so will she back off for now, or continue pushing ahead? And what does she want from Valentin anyway?

In Brooklyn to help his father, Sonny assumed that Mike had started gambling again, but that doesn’t seem to be the case. Mike insisted that a large sum of money he had delivered went missing, but then Sonny found the cash in his apartment! “What was the $10,000 doing in your cigar box?” Sonny demands to know. Unfortunately, he may not be prepared for the truth!

Sitting down with her editor at Kelly’s, Lulu realizes that while she’s an open book, Peter August remains a complete mystery. “I still don’t know a thing about you,” Lulu remarks. But considering how much trouble the intrepid reporter got herself into trying to investigate Cesar Faison, hopefully she doesn’t stick her nose into Peter’s business. Because if she learns that he’s really Faison’s other son, Henrik, all bets are off!

“I still don’t know a thing about you.” #GH pic.twitter.com/8sIvyM2vXV