Even as Nathan and Dante head into a potentially dangerous situation, Lulu begs Maxie to forgive her in these GENERAL HOSPITAL spoilers. But it may not be that easy! Meanwhile, the race for mayor of Port Charles heats up and Jim Harvey continues to insinuate himself into Franco’s life. What is he up to?

Julian is just trying to keep an eye on Molly and T.J. to make sure they don’t do anything stupid in their fight against their criminal landlord. And as the teens face off against him (with Kiki for backup), Molly insists: “We can take care of ourselves.” But are they in over their heads?

At the Metro Court, Ned tries to get Alexis on his side in his quest to become elected mayor of Port Charles, but she has to turn him down. “I can’t work on your campaign,” she explains, “because I don’t support your platform.” Can she convince him he’s taking the wrong side in the Charles St. redevelopment controversy? 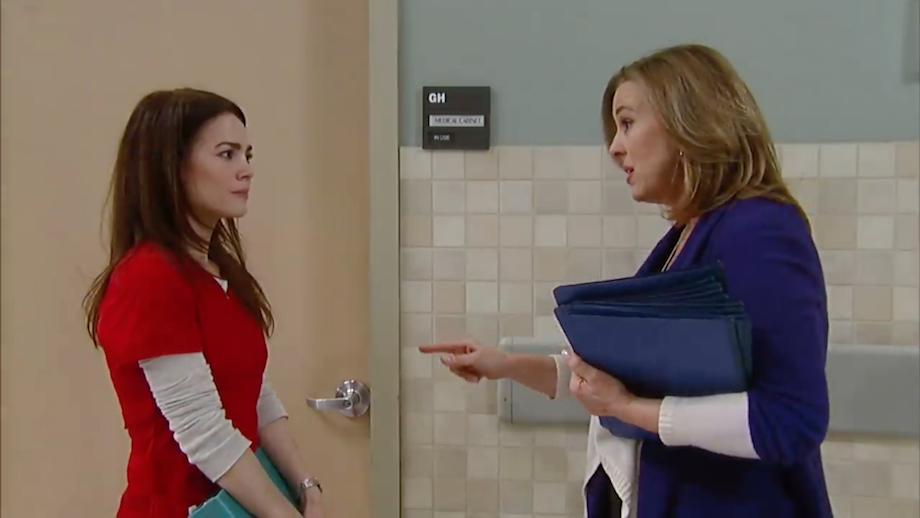 Laura has a warning for Liz, but will she listen? (Photo Credit: ABC)

Jim Harvey keeps trying to get Franco to open up to him, but to what end? “You don’t need to know the ins and outs of my personal life,” Franco argues. Meanwhile, at the hospital, Laura is concerned that the developer has a connection to Franco, and therefore, Liz. “Jim Harvey?” Laura warns. “All he cares about is the almighty dollar.” But could he be he more dangerous than that?

Lulu regretted publishing her article about Nathan being the son of Cesar Faison almost immediately, but it was too late — the damage had already been done. “Can you forgive me?” Lulu begs her best friend. But Maxie just hangs her head and looks away. Can she ever forgive Lulu for putting her, Nathan, and their unborn child in danger? Meanwhile, Nathan and Dante enter a room with their guns drawn, ready for anything. “Alright,” Nathan announces. “Hands up! No sudden moves!”

Bryan Craig Promises Another GH Return “Is Not Impossible”

Wes Ramsey Reveals When He Fell for Laura Wright