Jason and the mysterious Patient Six have finally come face to face, and Port Charles is about to explode in these spoilers from GENERAL HOSPITAL! But there are still some people who aren’t aware of the most shocking event in the town’s history — like Kevin and Laura, who are having a romantic dinner that could change their future together!

Although there seemed to be a little spark when they shared a fake kiss at the end of their fake date with Mac and Felicia, Finn is ready to call off his fake relationship with Anna. “It’s time for this thing to be over,” he argues. But will Anna let him “break up” with her if she thinks it will ruin her plan to trap Cassandra… and Valentin?

Valentin was nowhere near the Metro Court during the recent hostage crisis, but he can’t explain where he was to Nina because he was off being threatened by his old parter-in-crime, Cassandra. So when Dante confronts the couple and asks Valentin: “You know anything about what went down tonight?” how will the Cassadine respond? 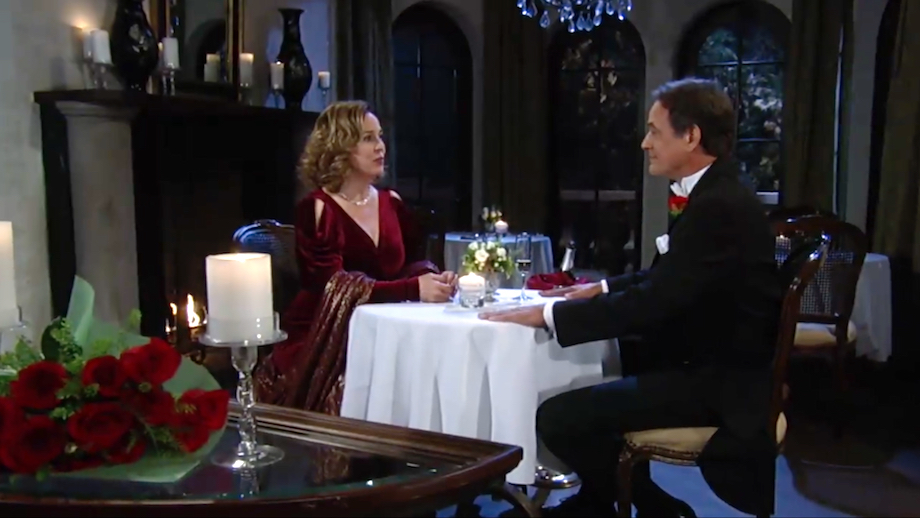 What does Kevin have planned for Laura’s romantic evening? (Photo Credit: ABC)

Laura and Kevin come together for a romantic meal and the couple are both dressed to the nines, her in a gorgeous velvety red gown and him in a sleek tuxedo. But could there be a particular piece of diamond jewelry in Laura’s future this evening? “I have never been more ready for anything in my life,” she assures her beau. Is Kevin finally going to pop the question for real?

With Patient Six reuniting with his friends and family, Andre is terrified that his role in the secret plan to keep him away from Port Charles will be exposed. “If I’m compromised,” he informs Dr. Klein, “I need to make plans of my own.” And when Jordan returns to the Corinthos compound, she is stunned to see Jason standing there with everyone… including Jason! As Sonny and Carly nervously look at the two men and then the police commissioner, she asks: “Anybody want to tell me what I’m looking at right now?” Well, that’s the $64,000 question, isn’t it?