The recent storyline on GENERAL HOSPITAL with the gentrification of Port Charles has brought Shari Belafonte back as Mayor Janice Lomax! The character of Mayor Lomax was introduced in May of 2012 with Saidah Arrika Ekulona in the role. She made brief guest appearances over the years, with her last in January of 2016. Belafonte made her debut in the role in January of 2016, appearing for a few episodes before returning in March when she battled Olivia in court.

“It’s been quite a learning curve and it’s been so much fun,” the actress told Soaps In Depth of working on her first daytime drama when she made her GH debut. “When you’re used to saying two lines a week and suddenly you have 70 lines over a two hour period, it’s quite a shell shock!

“The first thing they wanted to see is if I could get through the two days,” she added. “Now that I’ve managed that, new information should be coming my way.” 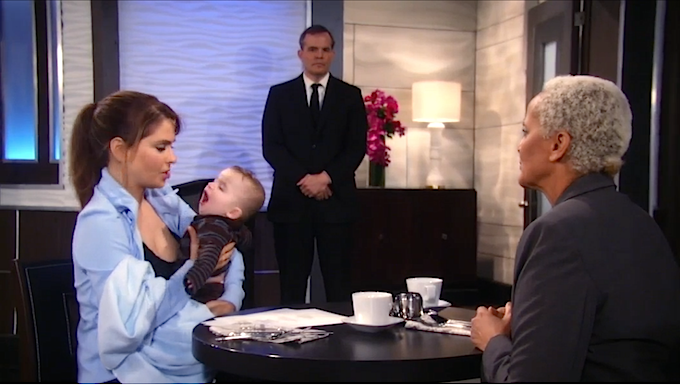 Intrigued by the character of Mayor Lomax, Belafonte wants to continue challenging herself with the role and the hectic pace of daytime. “I am fully ready to come back whenever they want me,” she declared. “And everyone’s been so nice. I went in like such a little fish out of water. I was in awe of Lisa LoCicero (Olivia) with the baby. The baby was screaming while she was getting through her lines. I was just in shock and awe. I was amazed. I was like, ‘Wow, how did you do that?’”

Belafonte is the daughter of legendary singer and actor Harry Belafonte. She started her career as a model before moving into film and television, with her best-known role being Julie Gilette in the primetime series HOTEL. She is also an accomplished singer, releasing multiple albums and performing on stage.

There are no details on how long this most recent stint will be, but with Lulu investigating the election tampering that put Mayor Lomax in office over Felicia, it seems likely Belafonte will have more appearances in the near future, so stay tuned! And for more GH news, keep reading the ABC edition of Soaps In Depth magazine!

SEINFELD actor John O’Hurley Recalls Getting His Start in Soaps